Opel Manta and Ascona A Turn 40

Bridging the gap – two new models made a splash in the 1970s Opel has long mastered the art of turning niche products into successful high-volume models. While today flexible vans like the Meriva and Zafira are setting trends, in 1970 the Manta and Ascona tapped new vehicle segments for the automaker, selling nearly 1.2 million units in only five years’ time. Yet, thought they shared the same technical platform, they addressed different customer groups: The Manta was a dynamic sports coupé; the Ascona a comfortable family car or compact lifestyle station wagon. Manta – the family friendly coupé The Manta was presented to the media in September 1970 at the Hotel Maritim in Timmendorfer Strand, near Lübeck at the Baltic Sea in Germany. The sleek coupé carried a manta ray emblem that was based on photos taken by the French marine biologist Jacques-Yves Cousteau. M 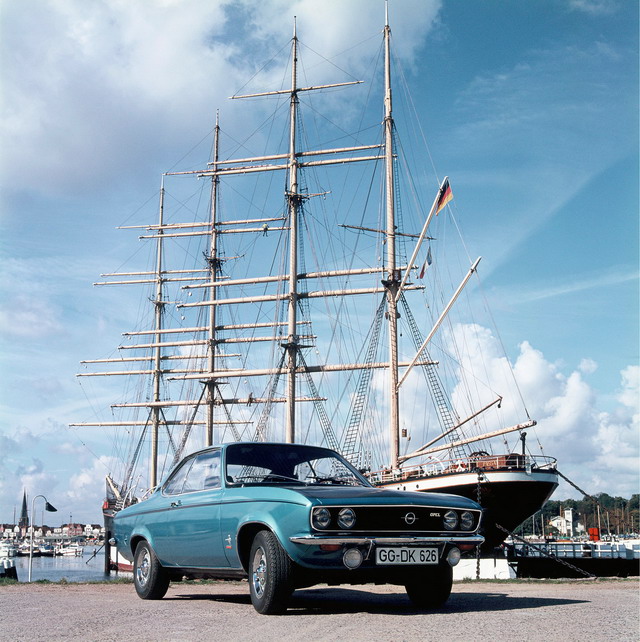 odeled on the pony cars that were popular in the US at the time, the sporty Manta was positioned as a vehicle that met a new demand – somewhere between a conventional coupé and a traditional sedan. Like the pony cars, the Manta was stylish yet suitable for everyday family use. By the end of the 1960s more and more young and young-at-heart car buyers were opting for attractive coupés. Individualism was in; and the self-contained line of the Manta fit the bill. In the first half year of sales in 1971, Opel sold 55,399 Manta models. Versatile – A car for everybody The Manta shared the floor assembly and a chassis modified for a dynamic drive with the Ascona. As in the Ascona, the 1.6-liter engines with 68 and 80 hp were a new feature. The 1.9-liter S engine offered for the sporty Manta SR model came from the Opel Rekord, had 90 hp and was initially reserved for the Manta. The entry-level model in the Manta range was the 1.2-liter version with 60 hp launched in 1972. The Manta GT/E premiered in 1973 with a 1.9-liter injection engine and Bosch L-Jetronic. It had an output of 105 hp. The Manta A was the first Opel with electronic injection. Thus equipped, the GT/E had 15 hp more than the 1.9-liter S engine. Matching the style of the times, the Manta GT/E largely dispensed with chrome décor in favor of black matt. In April 1975, shortly before the debut of the Manta B, the last special model was launched: The Manta Black Magic was completely black with red-orange decorative stripes on the flanks. Opel built 498,553 units of the Manta A. Ascona – The car of the technical future The Ascona A debuted at the Turin Salon in 1970 and was dubbed the “car of the technical future,” according to the press kit. It was positioned between the Kadett and the Rekord, targeting a growing customer segment. 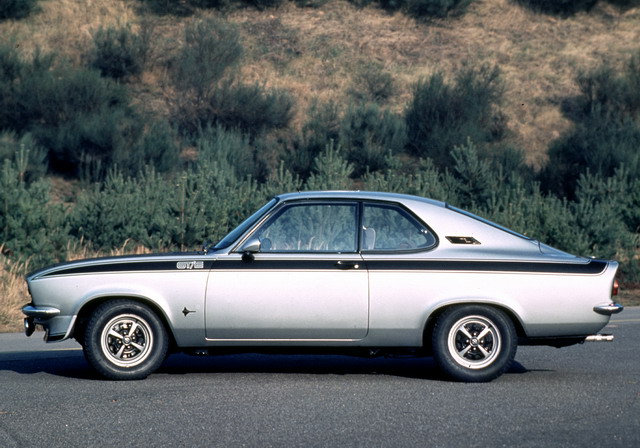 By March 1975, some 691,438 units of the Ascona A were built. The chassis, suspension and drive train technology of the Ascona and Manta were identical. The front axle had independently suspended wheels with coil springs and telescopic shock absorbers; the rigid rear axle was controlled by two trailing arms and a Panhard rod. The Ascona was available as a 2- and 4-door sedan in standard and luxury versions. It had a 1.6-liter, four-cylinder engine with 68 hp as well as a higher-compression S-version with 80 hp. Like the larger four-cylinder engines of the Rekord, the Ascona powertrain also had a camshaft arranged laterally in the cylinder head, known as “camshaft in head.” A low-cost entry-level model was introduced with the launch of the 60 hp 1.2-liter engine in March 1972. Ascona Voyage – The new middle The pioneer of all lifestyle station wagons, the innovative Ascona Voyage was a widely acclaimed addition to

Opel’s model line-up. The two-door caravan version was not a classical station wagon, but a leisure-time vehicle with space for a rubber boat or bicycles: It was a car for young families. “These days, the desire to travel, go camping, participate in sports – especially transport-dependent hobbies like water sports – all demand a passenger car with generous space and transport capacities. But no sacrifices will be made in passenger car comfort. The car we have built to meet these needs is called the Ascona Voyage,” declared the press materials. The Ascona Voyage was only offered originally as an L version; the range first expanded in 1974 by a less luxurious caravan version. Ascona SR – The stuff of winners The Ascona 1.9 S and the Ascona SR were introduced in spring 1971. The SR version came with an 80 hp 1.6-liter S engine or a 90 hp 1.9-liter unit. The two more powerful versions could be ordered with a three-gear automatic transmission as an optional extra. The SR equipment was also available for the Voyage – a novelty for the station wagon segment. In the sedan, it illustrated the sporty potential of the Ascona. In 1974 Walter Röhrl and Jochen Berger lined up at the start of the European Rally Championship with a two-door sedan. The Ascona of the Opel Euro Dealers Team had a four-cylinder engine re-bored to 2-liter displacement and featured an aluminum cross flow cylinder head that produced 200 hp at 6700 rpm. Röhrl and Berger were victorious in six of eight races and won the European Rally Championship, reaching an unprecedented 120 points. In 1975, Röhrl and Berger won the Acropolis Rally and booked the first Opel victory in a world championship rally race in their Ascona A, shortly before it was replaced by the Ascona B.