CORVETTE SHINES IN THE BIG APPLE

NEW YORK – Sixty years ago tomorrow, spectators lined New York City’s posh Park Avenue, waiting to get a glimpse of the ground-breaking Chevrolet Corvette on display at the General Motors’ Motorama show. On Thursday, the Corvette will be back in The Big Apple, marking the historic milestone with the all-new 2014 Chevrolet Corvette Stingray.

“The all-new 2014 Corvette Stingray is the most advanced and engaging Corvette in the long, prestigious legacy of this uniquely American success story,” said Chris Perry vice president of Chevrolet Marketing. “It is a car woven into the fabric of American culture and it got its start right here in the Big Apple.”

The introduction of the original Corvette took place at the Waldorf Astoria Hotel on Jan. 17, 1953. That year, more than 1.4 million people saw the curvaceous design and futuristic approach of the Corvette at displays around the United States.

The enthusiastic response prompted Chevrolet to accelerate production plans and by late June that year, Corvettes were rolling out of a specialized assembly facility in Flint, Mich. Only 300 were built in 1953 – all of them white with a red interior. They represented an auspicious launch for a car that would become synonymous with performance, technology, design and aspiration.

The 2014 Corvette Stingray remains true to its roots as a two-seat sports car that delivers an engaging driving experience through advanced engineering and lightweight materials. Its technologies are supported by a racing-influenced design and features engineered to work cohesively and deliver the most connected driving experience in the nameplate’s history. It is also the most powerful standard model ever and the most efficient, with 450 horsepower (335 kW) that enables 0-60 times of less than four seconds and projected highway fuel economy greater than 26 mpg.

The 2014 Corvette Stingray coupe goes on sale in the third quarter of 2013. 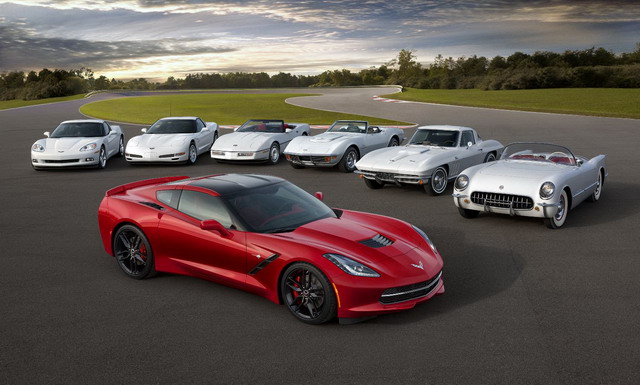 Founded in 1911 in Detroit, Chevrolet is now one of the world's largest car brands, doing business in more than 140 countries and selling more than 4.5 million cars and trucks a year. Chevrolet provides customers with fuel-efficient vehicles that feature spirited performance, expressive design, and high quality. More information on Chevrolet models can be found at www.chevrolet.com.