1955 Pegaso Tipo Z-102B 2.8-litre, Saoutchik Coupe E.N.A.S.A. (Empresa Nacional de Automocamiones S.A.) was created by the Spanish government at the end of World War II; it absorbed the remnants of the famous Hispano-Suiza factory where it manufactured the Pegaso between 1951 and 1957. Named for the mythological inged horse, Pegasus, the Pegaso sports car was introduced at the Paris Salon in 1951. This Saoutchik-bodied coupe is one of two identical cars built for the international auto show circuit; its unusual styling attracted worldwide attention. The Pegaso is the only post-war Spanish automobile to have garnered international fame. It remains a legend for its high level of technical sophistication and its unique and trendsetting style. With prices in the $15,000 to $35,000 range, the Pegaso was one of the most expensive cars in the world. Production ended in 1958: 86 cars were built, and 56 cars still exist. Engine Body/Coachbuilder 8 cylinder, V-type, DOHC J. Saoutchik Carrosserie 3.14” bore, 2.76” stroke Paris, France 171.5 cubic inch 250 hp. @ 6500 rpm. Manufacturer E.N.A.S.A. (Pegaso) 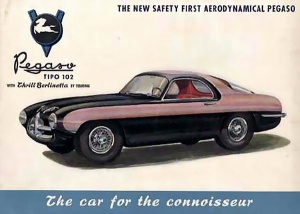 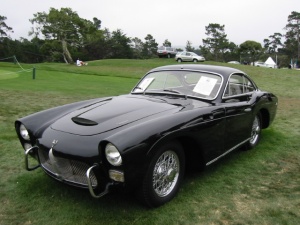