The Force 7V was developed from the Leyland P76 but shares only the inner engine bay panels in common with the 4 door sedan. Sixty body shells were pressed and about 56 cars built, however only nine production models were completed - the rest (while mostly complete) were crushed when Leyland shut down the P76 production line on 31st October 1974. One prototype survives also. It spent most of it life in England after being shipped to Rover for evaluation purposes and then being sold at auction a few years later. About 18 month ago it was sold and shipped to a collector in New Zealand. Eight of the other surviving cars are still "alive" in Australia and another is currently "living" in Greece. All up 5 manuals and 5 automatics with the 4.4 litre alloy V8 survived the crusher (as they say in Australia). There were to have been 3 basic models the Force 7 - a six cylinder version, the Force 7V (the only model completed) and the Tour De Force - a luxury model for which only the add-on parts and trim were made. Warrewyk Williams, Australia 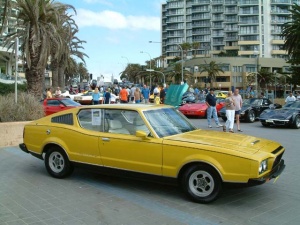 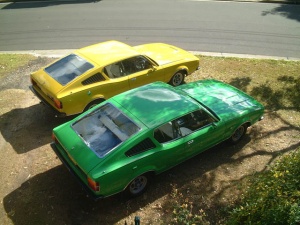