Shortly after Sig. De Tomaso's takeover of Maserati in 1975, he sent one of his Tom Tjaarda-designed Longchamps to Sig. Frua in Torino for a freshening up. Frua did a marvelous job on this coupe, providing a grille and frontal area that had a strong family resemblance to his earlier Quattroporte and, of course, the Vignale Mexico. The Kyalami truly became the evolution of the Mexico, and is named for the racing success Maserati enjoyed at the South African Grand Prix. This would be the last Maserati Pietro Frua would do, as he died shortly thereafter. He produced a luxurious, but simple 2+2, a car I've dubbed the two-door Quattroporte. The running gear would all be used later in the new Quattroporte III. The tried and true 4.2-liter, four-cam, Maserati V8 is coupled to the big ZF S5 24-3 transmission, and power is transferred to the independently-sprung rear end, featuring inboard brakes and giant aluminum outer hubs. It's conservative in styling, yet classical in execution, very Italian, very impressive. Consider the 225 70 VR 15 Michelin XWX mounted on the Campagnolo 7-1/2 inch wide wheel. No complicated fuel injection system, just simple Weber carburetors. There are really no weak points in the Kyalami; it's a hard-charging, trouble-free thoroughbred. Collectible? Very much so, because of the very limited number produced and the fact that so few exist in the US, none were certified or officially sold into the states, but approximately ten to fifteen Kyalamis have found their way into the US, making them a very rare car in this country. These facts alone would indicate that this is a car worth considering. Over an eight-year period, the factory produced no more than 250 Kyalamis. 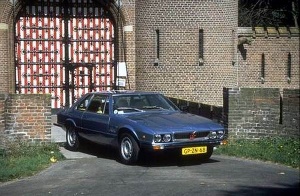 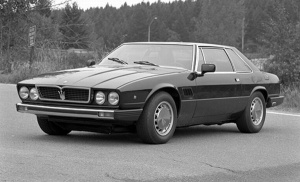 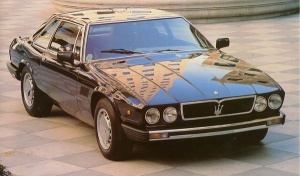